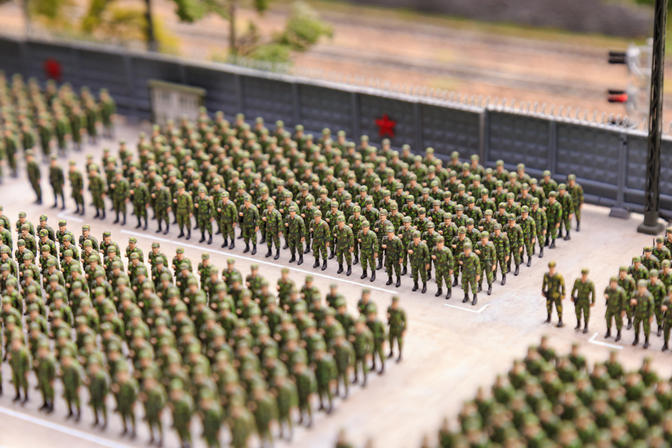 Veyshnoria (Viejšnoryja) is a fictitious state, invented for the purposes of the Russian-Belarusian strategic military exercise “Zapad-2017”. For the first time the legend of the exercises became available to the public during the briefing done by the head of the General Staff of Belarus Major-General Oleg Belokonev on August 29, 2017. According to the legend, the union of Belarus and Russia (the Northern) is opposed by three fictitious states - Lubenia (situated on the part of Poland), Vesbaria (in Lithuania and Latvia) and fictitious, which is located in the North-West of Belarus. 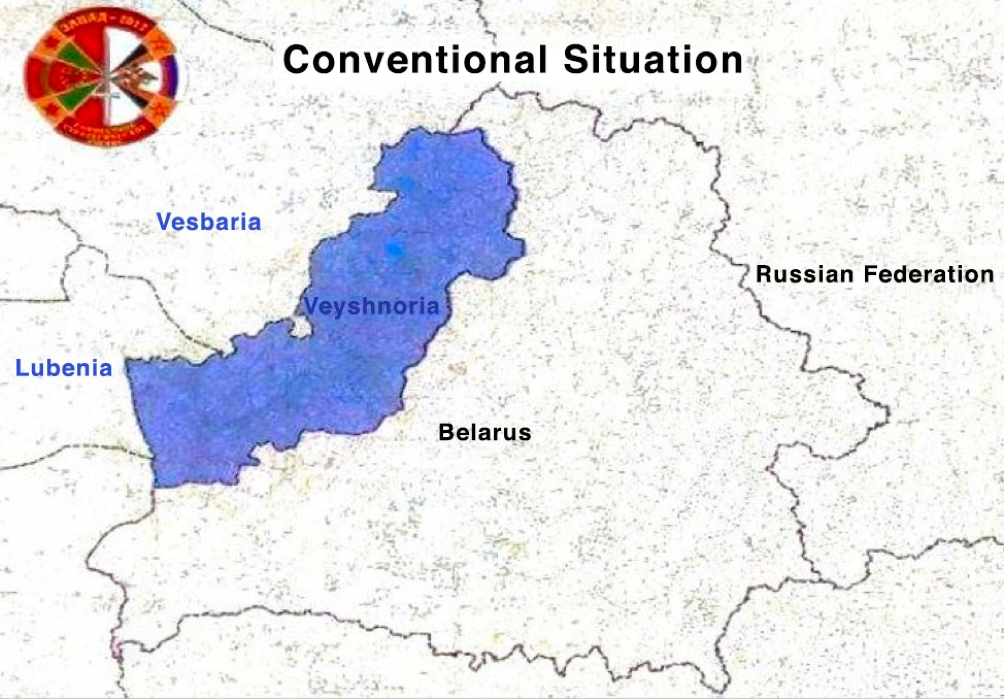 According to the plot of the exercises, Veyshnoria retains territorial claims on the part of the territory of Belarus and with the help of its allies it tries to destabilise situation in Belarus by influencing political and social life and then, by sending terrorist groups. When this scenario failed, the three tried to attack Belarus with military means. After that, Russia joined the conflict to defend its ally – Belarus.

What is the territory where Veyshnoria has been placed?

Immediately after the Belokonev’s briefing Veyshnoria became an Internet meme. Bloggers and social networks users started to spread funny pictures and cartoons about Veyshnoria and its relations with Belarus and Russia. There were created Twitter and Facebook accounts and the web-sites of Veyshnoria, its MFA, and National Bank, pages in Wikipedia, etc. Veyshnoria’a web-site started to issue national Veyshnorian passport and ID cards. Many Internet users began to register as Veyshnorian citizens. The new state received its flag, coat of arms, anthem and money.

The popularity of the new fictional state among Internet users can be described by several coincidences: 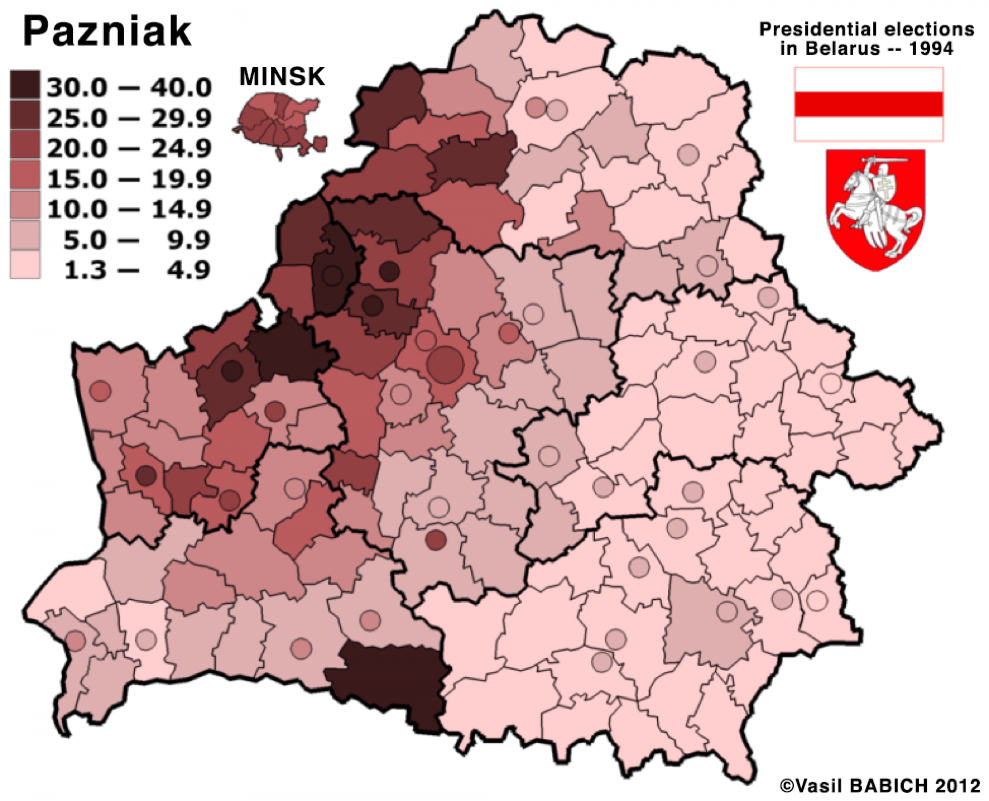 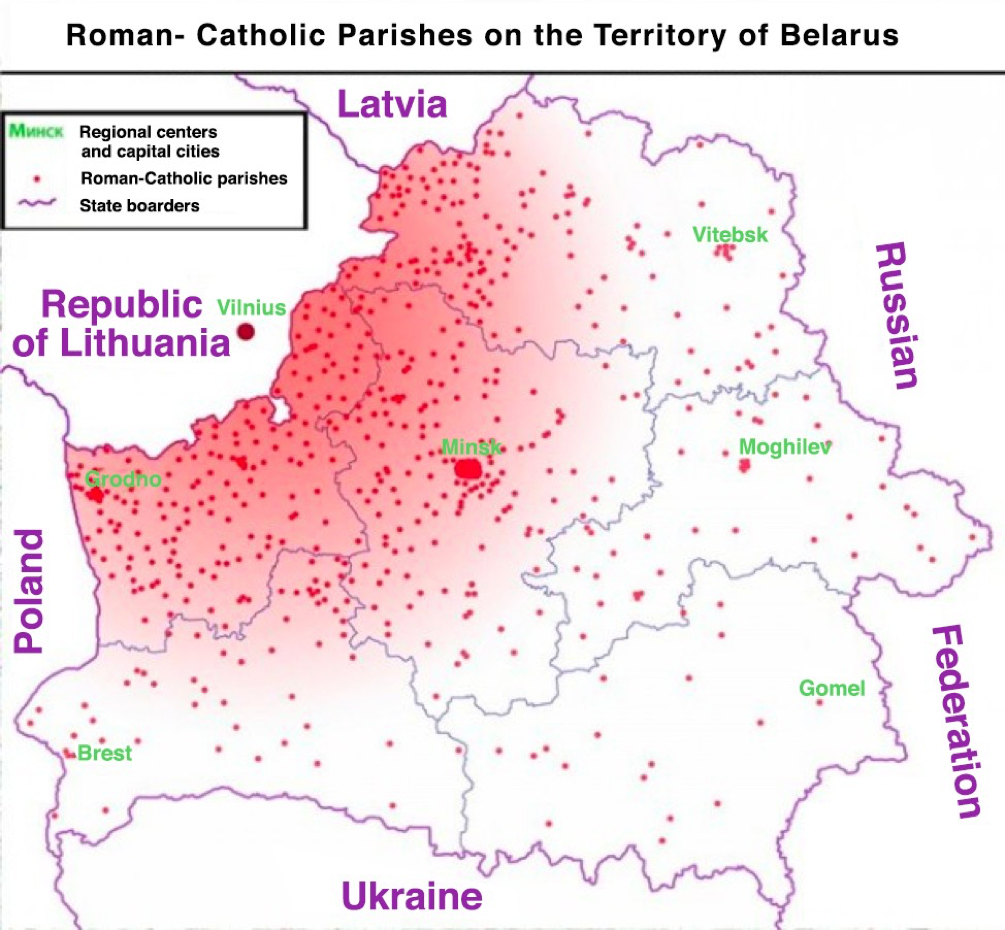 Many opposition-minded Belarusians chose to identify themselves with Veyshnoria because they saw in this imaginary state a country of their dreams – the ideal Belarus – without Lukashenka, with domination of Belarusian language, pro-Western and anti-Russian. That’s why all attributes of Veyshnoria are of Belarusian national tradition: social networks accounts and web-sites use mostly Belarusian language (rarely spoken in real Belarys), in its Latin graphic version; the flag is slightly changed nationalistic Belarusian red-white-red flag; Veyshnorian currency is taler – which was used on the territory of Belarus during Middle Ages. So, the phenomenon of the virtual state of Veyshnoria can be describes as a variant of escapism (avoidance of unpleasant reality) from some part of Belarusian society which is frustrated by the long Lukashenka’s rule and which has its own vision of ideal Belarus, that is actually unachievable.

Did religion factor play any role?

Though the territory where Veyshnoria was placed is a traditionally Catholic region, neither virtual Veyshnoria, nor Veyshnoria from the military plans of the “Zapad-2017” was portrayed as a Catholic country. Religion did not play any role in the whole discourse around Veyshnoria. One should also bear in mind that Belarus is one of the most atheistic countries in Europe. In its history, Belarus was a place were representatives of different religions and denominations (Orthodox, Catholic and Protestant Christians, Jews and Muslims) have lived together relatively peacefully; religious wars that often happened in other parts of Europe never took place here. Nowadays the major religious communities in Belarus are the Orthodox (of Moscow Patriarchy) and the Roman Catholics. They cohabit peacefully and do not influence political life in the country. Belarusian authorities to underline the religious peace even from time to time suggest organizing in Belarus a historic meeting of the Pope and Moscow Patriarch.

So why did generals put Veyshnoria in North-West Belarus?

In war games this is a common practice to draw imaginary “rogue state” on the territory of its own country. Most probably Veyshnoria was placed in North-West Belarus due to the following reasons:

First, it couldn’t be placed in Eastern Belarus due to obvious reason – it would form a buffer zone between Belarus and Russia that would make the legend of military drills too far from real strategic situation thus making the whole exercises not that useful. This is not a secret for anyone that during “Zapad” exercises Russia simulated a conflict with NATO which is to the West of the Union State of Russia and Belarus. NATO is doing the same, by the way.

Second,Veyshnoria also could not be placed along the border with Ukraine (although the spillover of instability from Ukraine is much more serious threat for Belarus compared to NATO), because Ukraine is the second trade partner to Belarus and sustaining of good relations with Kyiv is tremendously important for Minsk. Thus, Minsk decided not to frighten Ukraine too much as it was already an epicentre of alarmist rhetoric about “Zapad-2017”.

Third, to decrease the unprecedented degree of alarmism and avoid possible incidents it was also decided to use military facilities for the exercises that are situated not too close to borders of NATO countries. So the imaginary frontline with imagined “NATO” was moved eastward, thus a place for addition fictitious state was created.

All in all, organizers of the military drills very quickly understood that they had made a mistake with the choice of a place for Veyshnoria as the meme started to spread and the Belarusians started to associate themselves with this state. Therefore, after the briefing with Belokonev (August 29) they never used publicly the name “Veyshnoria” and very soon afterwards, articles about Veyshnoria disappeared from Russian and Belarusian Wikipedia.

This website uses cookies to improve your experience while you navigate through the website. Out of these, the cookies that are categorized as necessary are stored on your browser as they are essential for the working of basic functionalities of the website. We also use third-party cookies that help us analyze and understand how you use this website. These cookies will be stored in your browser only with your consent. You also have the option to opt-out of these cookies. But opting out of some of these cookies may affect your browsing experience.
Necessary Toujours activé
Necessary cookies are absolutely essential for the website to function properly. These cookies ensure basic functionalities and security features of the website, anonymously.
Functional
Functional cookies help to perform certain functionalities like sharing the content of the website on social media platforms, collect feedbacks, and other third-party features.
Performance
Performance cookies are used to understand and analyze the key performance indexes of the website which helps in delivering a better user experience for the visitors.
Analytics
Analytical cookies are used to understand how visitors interact with the website. These cookies help provide information on metrics the number of visitors, bounce rate, traffic source, etc.
Advertisement
Advertisement cookies are used to provide visitors with relevant ads and marketing campaigns. These cookies track visitors across websites and collect information to provide customized ads.
Others
Other uncategorized cookies are those that are being analyzed and have not been classified into a category as yet.
Enregistrer & appliquer